We wanted to provide a brief update on new and enhanced support for operating systems and game engines within OSVR.

Mac support for OSVR has been steadily improving. The recent HDK firmware update has resolved several USB connectivity issues. The stack cleanly compiles, and the HDK is usable on Mac OS. SteamVR-OSVR also works on Mac OS and Linux, though there are bugs in SteamVR which need to be worked around, and the SteamVR compositor is not available.
A Homebrew tap is now available at https://github.com/OSVR/Homebrew-OSVR, and at present this is the preferred way to install it on Mac OS. Near-term improvements will include improvements to the OSVR Server configuration scheme as well as better ways to locate finding plugins.
Even with these minor issues, OSVR is usable on Mac OS X, as is SteamVR. The remaining issues will be resolved in the near future, with an easy-to-use binary package coming at some point.

We have made several improvements to Android support, including:

OSVR is being compiled on Linux everyday as part of our Continuous Integration server. However, we improved the build instructions to make it easier for others. We have also see demos of Unity/OSVR/Oculus on Linux, SteamVR/OSVR on Linux and others. 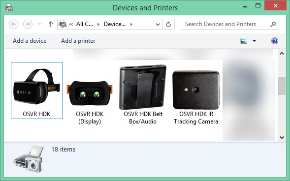 A new OSVR driver installer has been added for Windows. It sets up drivers including:

Aside from improvements to currently-supported platforms, we would like to continue the work towards supporting:

If you have another configuration you’d like to run OSVR on, we’d love to help out.

We finally have a working SteamVR driver! This means you can use the OSVR HDK to play SteamVR games, or to develop software that uses the SteamVR API. So far most of the testing has been with jMonkeyEngine (via jMonkeyVR) and Team Fortress 2. TF2 is already quite playable with the HDK. If anyone would like to try using SteamVR-OSVR, binary builds and installation instructions are available at https://github.com/OSVR/SteamVR-OSVR#binary-usage-instructions.

Just to clarify, the SteamVR-OSVR project allows OSVR-supported hardware to be used with SteamVR. We do not yet have support for HTC Vive as an OSVR device, though I hope that this will be available soon.

I am aware of teams working on a Blender plugin as well as CryEngine. If you have another game engine you’d like to integrate with OSVR, we’d love to help out.

Any questions or issues? email support@osvr.com

Thank you for being part of OSVR!